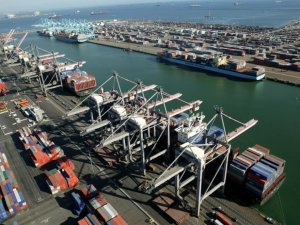 Californian port of Los Angeles has recorded an increase of 7 percent in the capacity handled in November, a total of 709,968 twenty-foot equivalent units (TEUs), compared to the same period last year.

“We’ve seen container volumes at and above 700,000 TEUs for the past six months, which demonstrates consistency and the strength of our supply chain partners,” said Port of Los Angeles Executive Director Gene Seroka.

“With larger vessels coming into the transpacific trade this month, including the CMA CGM Benjamin Franklin, we can further show the gains we have made this year in terms of effectively moving greater volumes through our port.”

The port has seen an improvement in its imports by 7.6 percent to 358,423 TEUs in November, compared to the previous year.

This news is a total 3198 time has been read
Tags: Port of Los Angeles, rise, Volumes.