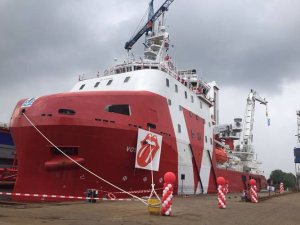 The extended installation of a Kongsberg reference system (including a ‘windfarm module’), and an active heave-compensated crane from SMST.

The 80m VOS Start arrived at Oranjewerf on June 1 from her build yard in China, staying for eight weeks in the yard to also undergo various other upgrades and preparations for her first project, a charter to MHI Vestas Offshore Wind for the construction of the Walney Extension Offshore Wind Farm in the Irish Sea. There she will provide logistics support, accommodation and W2W capability.

The VOS Start is the fourth in a series of new vessels for Vroon brought to Oranjewerf for finishing off following their initial build in China. However, this is the first time that Damen Shiprepair Oranjewerf and Vroon have worked together on a W2W vessel and, with Barge Master and SMST both Dutch companies, it was logical to do the final installations in the Netherlands with all the necessary expertise and support close by, Damen explained. Other local specialist suppliers also contributed to what has been, owing to the W2W element, the most complex upgrade yet for a VOS subsea support vessel at Oranjewerf.

These specialists included Niron Staal Amsterdam, another member of the Damen Shipyards Group, which fabricated two boat landing ladders which were then installed by Oranjewerf. Other equipment installed include a Lightweight Taut Wire, Radius and a Hipap position reference system, all manufactured by Kongsberg. The mountings necessary for up to eight temporary living units, supplied by H2M, were also fitted, along with many other modifications.

“As always, completing the works within the time allowed was a challenge,” said Jeen van der Werf, Commercial Manager at Damen Shiprepair Oranjewerf. “Detailed planning prior to the vessel’s arrival ensured that no time was wasted and everyone worked efficiently and effectively. Double shifts were worked when needed and on occasions activity continued around the clock to ensure that progress remained on schedule. Oranjewerf is particularly well-suited for this project, due not just to the capabilities of its workforce, but also to the extensive craneage on its berths and space on the quays for the largest mobile cranes.”

The VOS Start was also placed in Oranjewerf’s 135m floating dock for a period to allow the installation of the boat landings.

According to Damen, a key element in the success of this project was the cooperation between Damen Shiprepair Oranjewerf and Vroon Group BV / Vroon Offshore Services, represented on-site by senior newbuilding superintendent Foppe Molenaar. “We returned to Damen Shiprepair Oranjewerf based on the good experience that we have had over the years with them,” he commented. “We bring our uncompleted vessels here as the yard has proven its ability to undertake complex work quickly and handle all the last-minute surprises that are typical of these projects. Damen Shiprepair Oranjewerf is also very open to working with external suppliers; at times we had a lot of people working in a small area, but it all went smoothly with no problems.

“With the VOS Start a lot of extra work was added during the project,” he continued, “and as this is a new ship type for the Vroon fleet its progress received a good deal of attention from across the Group and from maritime renewable market representatives and potential charterers. So we needed a yard that we could depend on, and in addition to this we had a charter deadline to meet, so speed was essential. For us, working with Oranjewerf feels like being part of a single, integrated team and the end result has been most satisfactory.”

This news is a total 1739 time has been read
Tags: Vroon W2W Vessel Upgraded ahead of First Charter