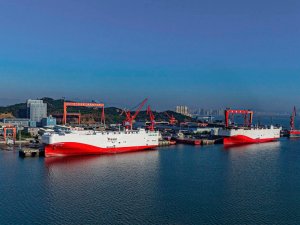 German giant Volkswagen Group said it will soon have at disposal two LNG-fueled vessels it chartered from Siem Car Carriers.

They will be deployed on the trans-Atlantic route, so-called America Round Tour, from Germany’s Emden to Mexico via several ports on the east coast of the USA.

The first of two vessels, Siem Confucius had been delivered to Siem Car Carriers in March this year, according to a recent statement by the Norway-based shipping company.

The vessels are claimed to be the largest and the first liquefied natural gas-powered overseas car freighters.

Volkswagen now also becomes the first automaker to use LNG-powered ships in long-distance overseas distribution of cars and light vehicles.

The car carriers are 200 meters long and 38 meters wide with a capacity of 7,500 car equivalent units (CEU).

The vessels feature two LNG tanks with a capacity of 1,800 cubic meters each. That’s enough for a complete round trip, and it ensures a ten percent reserve tank, sufficient for several days, according to Volkswagen.

Both vessels are powered by a 12,600 kilowatt dual-fuel marine engine with direct injection and exhaust gas treatment from MAN Energy Solutions.

The Hague-based LNG giant Shell will be responsible for fueling of the vessels as part of a deal signed with Siem Car Carriers in 2017.

This news is a total 516 time has been read
Tags: Siem Car Carriers , volkswagen Documentary Unveils New Evidence in Tragic Sinking of MS EstoniaThe tragic sinking of the ro/pax cruise ferry MS Estonia in 1995 is well known, and it is commonly used as a case study in maritime training programs. CMA-CGM Struggles To Restore Systems After Cyber AttackCMA CGM’s IT engineers continue, for the fifth day, to try to restore its systems following a cyber-attack at the weekend, the French carrier has come under mounting criticism from customers that its back-up booking process is inadequate.