Wakashio Captain Confirms He Navigated Close to Shore to Pick Up Cell Signal, But Blames Chief Officer for Grounding 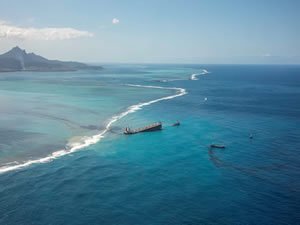 The Wakashio was unladen when it ran onto a reef off Mauritius’ Pointe-d’Esny on July 25, 2020, while en route from China to Tubarão in southern Brazil.

The captain of the ill-fated bulk carrier M/V Wakashio told a Mauritius court that he navigated the ship closer to land to allow his crew members to pick up cell phone service so they could connect with loved ones back home, but said ultimately it was his Chief Officer who ran the ship aground back in July.

Captain Sunil Kumar Nandeshwar appeared for the third and final time before the Court of Investigation set up to investigate the accident, where the 59-year-old Indian national again testified that he decided to maneuver the ship close to land to pick up cell phone signal as a gesture to the ship’s crew, who were working beyond the initial scope of their employment agreements. However, according to the captain, fault lies with the first officer.

Captain Nandeshwar said that if Chief Officer Subodha Janendra Tilakaratna had followed his instructions, the ship would not have grounded at all because, in the captain’s view, the vessel’s course was altered, bringing it within 1.5 nautical miles of the coast of Mauritius.

He said he did not intervene that night because the Chief Officer was an experienced sailor. He also pointed out that although the Chief Officer had consumed alcohol, he was not under influence on the night of the accident. The consumption of alcohol, he explained, is allowed on board under certain conditions.

The Wakashio was unladen when it ran onto a reef off Mauritius’ Pointe-d’Esny on July 25, 2020, while en route from China to Tubarão in southern Brazil. The vessel initially appeared stable, but after spending weeks on the reef, it eventually broke up, resulting in the release of some 1,000 tonnes of heavy fuel oil which seeped into Mauritius’ lagoons and created an environmental disaster.

In his testimony, Captain Nandeshwar pointed out that he had modified the course of the ore carrier to avoid a tropical depression and to pass as close as possible to Mauritius by heading for an artificial point on the French island of La Reunion. In doing so, crew members would be able to pick up cell signal to contact loved ones back home. The Captain noted that the crew was initially due for crew change on 19 January 2020, but due to COVID-19 restrictions, their crew change had been cancelled.

Speaking about his career, Captain Nandeshwar said he was promoted to captain at the age of 30, well ahead of many of his peers, and he stressed that he had commanded some 20 to 25 ships, mostly tankers, before taking the helm of ore carriers. He claimed he has never had any accidents, and also confided that his wife is a private doctor and that he has two children.

Monday’s hearing also saw the testimony of Mauritius’ Director of Shipping. Alain Donat, who described the response after he was informed that the MV Wakashio had grounded. Donat stressed that the Government of Mauritius lacked the equipment to pull the ore carrier off the reef and was hesitant to take on the salvage on its own, given liability issues that could arise in doing the work.

Immediately after the accident, Donat said he contacted Scott Shipping, a local ship agent, to inquire about the use of the Coral Sea FOS, a salvage tug that has been stationed in the region in response previous accidents involving the M/V Angel 1 (2011) and M/V Benita (2016).

Donat went on to say that the salvage operation took time because of bad weather and the remoteness of Mauritius. Equipment had to be sent by charter aircraft since local aircraft lacked the capability. To get from the local airport to the wreck site, equipment had to then be trucked to Port Louis’ harbor for loading onto the Stanford Hawk, a tug belonging to Smit Salvage, the appointed salvage firm. The hearing Director of Shipping is expected to continue on Tuesday.