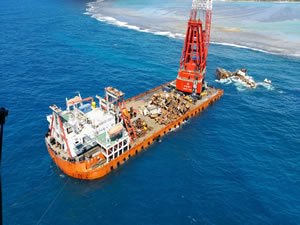 The MV Wakashio will now soon be a distant memory for the inhabitants of the seaside resorts of Blue-Bay and Pointe-d’Esny, in the South-east of Mauritius.

The aft-part of the Panamanian-flagged ore carrier Wakashio has been disassembled in Mauritius.

The MV Wakashio will now soon be a distant memory for the inhabitants of the seaside resorts of Blue-Bay and Pointe-d’Esny, in the South-east of Mauritius. Eighteen months after the giant ore carrier ran aground on the reef, the stern has been completely dismantled.

The debris, scattered over a 300-meter radius around the site, will be recovered by next week.

The Ministry of Environment will then determine what damage has been done to the marine ecosystem along the Southeast coastline, which is home to the Blue-Bay Marine Park and a Ramsar site. The State of Mauritius will then calculate the amount to be claimed from the insurer of the ship, owned by the Japanese company Nagashiki Shipping.

Chartered by Mitsui OSK Lines, the MV Wakashio ended up on the reefs of Pointe-d’Esny on the night of Saturday, July 25, 2020, while en route to Tubarão, in Santa Catarina, southern Brazil. It departed the Chinese port of Lianyungang, in Jiangsu, on Saturday July 4, 2020. After fuelling in Singapore, it was supposed to pass off Mauritius like it has done in the past.

The captain and his first mate, convicted and deported last month, came close to the island in order to pick up the island’s cell phone network to connect to WhatsApp, as most of the crew has been at sea for more than a year due to the global Covid-19 outbreak.

The captain was attending an engineer’s birthday party and the lookout officer was by his side whilst the ship was on autopilot. Almost 1,000 tonnes of oil spilled in the pristine lagoon due to the rupture of one of the three tanks some days later.

The ore-carrier ultimately broke in two due to the swell. The 225-meter bow was scuttled on August 2020 at a depth of 3,180 meters, about 20 nautical miles from the village of Old-Grand-Port.

The dismantling of the 75-meter stern by the Chinese companies, Lianyungang Dali Underwater Engineering and Hong Kong Lidada Ocean Engineering, had to be cancelled on several occasions due to bad weather.

The operation resumed last October only to be suspended on various occasions due to poor weather conditions. Originally, the wreck removal should have ended by March 2021.

This news is a total 585 time has been read
Tags: MV Wakashio , marine accident , mauritius