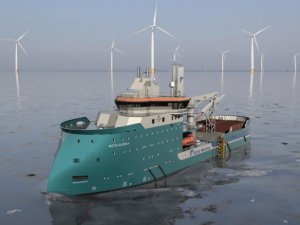 The hull of Acta Marine’s new Walk-to-Work vessel, Acta Auriga, has arrived at Ulstein Verft in Ulsteinvik, Norway where the final construction phase will take place.

Over the next several months, the hull will be outfitted, commissioned and sea tested before delivery by the end of the first quarter in 2018. The hull arrived from Crist shipyard in Poland where it was built and launched in dry dock.

The Acta Auriga, built to Ulstein’s SX195 design, is a dedicated walk-to-work, offshore logistics and accommodation vessel for clients in the offshore renewable and offshore energy industries.

Measuring 93.4 meters in length by 18 meters, the Acta Auriga will feature a motion compensated gangway for stepless personnel and cargo transfer, as well as a 3D motion compensated knuckle boom crane for 6-ton cargo handling in sea conditions up to 2.5 meters. Acta Auriga also offers state-of-the-art accommodations for up to 120 persons and 1,000 m2 deck space for cargo storage.

Another key feature of the Act Auriga is its ULSTEIN X-BOW® and ULSTEIN X-STERN® hull. While Ulstein’s X-BOW has become a popular choice for offshore vessels over the past decade, the X-STERN was first introduced in 2014 as its natural successor. It is designed so that a vessel can be positioned with the stern faced towards the weather instead of the bow, leading to improved weather resistance, greater operability and reduced power and fuel consumption while on DP mode, making it ideal for walk-to-work operations particularly in the offshore wind industry. The first X-STERN was introduced aboard Bernhard Schulte Offshore’s Windea La Cour in 2016.

Ulstein announced just this past January that it had signed a contract with Netherlands-based Acta Marine for the construction of the DP2 Construction Support Vessel (CSV) know known as Acta Auriga.

This news is a total 708 time has been read
Tags: Walk-to-Work Vessel Acta Auriga Nearing Completion at Ulstein Verft