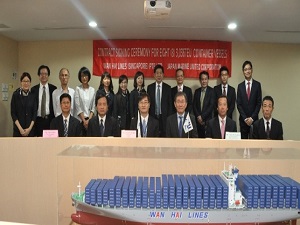 The company will start taking delivery of the vessels from October 2020. Currently, Wan Hai Lines operates a fleet of 72 owned vessels and 24 chartered vessels.  Established in 1965 by the late Dr. C.C. Chen, the publicly listed Wan Hai Lines is still controlled by the Chen family, reports industry analyst Dynamar.

Although its very first sailing was to transport steel between the U.S. and Japan, it has built its network around the North East Asia regional trades. Wan Hai has also made limited forays further afield with Africa, South America, North Europe/Mediterranean and North America although only those to North and South America remain. For all these, Wan Hai has needed to engage with other operators.

Despite being a small player in these deeper sea trades, its depth of shortsea coverage means it has a more than reasonable presence in the feeder sphere, albeit restricted to the Far East and Middle East/Indian Sub Continent, says Dynamar. Its total annual trade capacity of 955,000 TEU makes it the 12th largest provider of feeder services.