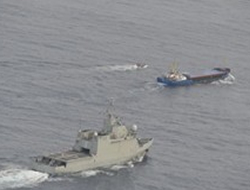 The WFP ship was escorted by ESPS Tornado from Mombasa to the port of Kismayo in Somalia. During the escort, members of the Spanish Navy crew remained on constant look-out, with the ship’s helicopter ready to launch at short notice to help deter any pirate attack.

During the first day of the escort, ESPS Tornado’s Executive Officer and the Boarding Officer visited the WFP vessel to meet the ship’s captain and his crew. They were able to discuss with the captain the importance of self protection measures, known generally as "Best Management Practice" (BMP), that help to protect a ship against pirate attack. Examples of BMP are: the use of barbed wire along the edge of the ship; increasing speed and surveillance while transiting the High Risk Area and the construction of a citadel or safe room in which the crew can lock themselves in should they come under attack and from where they can still control the ship and radio for assistance.

The Spanish Navy Offshore Patrol Vessel ESPS Tornado is currently on her first deployment with EU NAVFOR. The protection of humanitarian aid carried by WFP ships is one of the key tasks of Operation Atalanta. European Union navies participating in EU NAVFOR also deter, prevent and repress acts of piracy off the coast of Somalia and protect vulnerable ships.

This news is a total 1201 time has been read