Watch: ULCV Crashes into a Crane at Busan Port 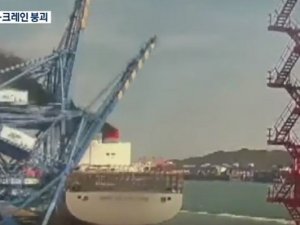 Ultra large containership Milano Bridge toppled a crane at a container terminal in the Port of Busan on Monday, April 6.

According to Korean media reports, the 13,900 TEU containership derailed cranes 81-84 and caused the crane 85 at the Busan New Port to collapse.

As informed, the collision occurred while the empty boxship was trying to maneuver at berth 7 with a pilot onboard.

A crane operator managed to flee the scene before the crane came crashing down and reported minor injuries to his ankle.

The Panama-flagged ship also contacted a berthed containership Seaspan Ganges, but the latter was not damaged and managed to sail away later that day.

The extent of the damages to the terminal is yet to be determined, however, it has been reported that the repairs might take up to 18 months.

The 2018-built containership is owned by the Japanese K Line and operated by Ocean Network Express.