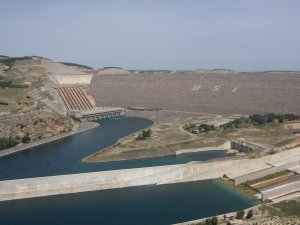 The Ataturk dam in east Turkey's Sanliurfa region generates the equivalent of one fifth of the electricity produced by 320 smaller scale dams in the country.

Turkey's biggest dam, and the world's sixth largest has reached required water levels for electricity generation and for irrigation after increased rainfall in the area, said head of the 15th region of the General Directorate of the State's Hydraulic Works.

The Ataturk dam in east Turkey's Sanliurfa region generates the equivalent of one fifth of the electricity produced by 320 smaller scale dams in the country.

The dam reached a 42 percent fill rate - enough to carry out sufficient irrigation of farm lands and ample electricity production, said the head of the 15th region of the State's Hydraulic Works, Numan Dogan Gunduz.

The fill rate in the dam is satisfactory as the level is the highest for this year considering that the country had faced much drought in the past years.

"Current water levels of the dam at 532 meters are good considering it is only February and is likely to rise with the melting snow in the coming months," Gunduz said.

The Ataturk dam is the costliest investment project since the country's establishment with a capacity of 2,400 megawatts, according to the General Directorate of State Hydraulic Works web-page.

With an annual electricity production of 8,900 gigawatt hours, the dam accounts for 20 percent of the country's electricity generation.

This news is a total 1844 time has been read
Tags: Ataturk, energy, area, water