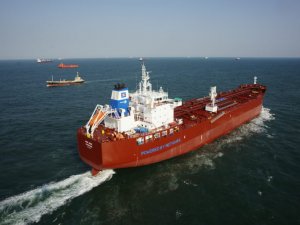 The four new vessels will be delivered in 2019 and, similar to their predecessors, will be built with MAN B&W ME-LGI 2-stroke dual-fuel engines that can run on methanol, fuel oil, marine diesel oil or gas oil. They will be built in Korea at Hyundai Mipo Dockyard, where several of the first-generation vessels were built.

Clean-burning methanol is increasingly being considered as viable alternative fuel to the shipping industry as it is capable of meeting all current and upcoming emission regulations set forth by the International Maritime Organization (IMO). The fuel made its first commercial appearance in 2015 aboard Stena Lines’ Stena Germanica car and passenger ferry.

“We are very happy to be working with Waterfront Shipping again on this innovative technology. With seven engines already in operation and proven in the field, this new order confirms the ME-LGI concept as a mature technology. Since this dual-fuel engine entered the market in 2016, its price has dropped considerably, which makes it an even more attractive propulsion option. Allied with its environmental credentials and convenience of use when employing methanol as a fuel, we are confident the ME-LGI will continue its promising progress,” states René Sejer Laursen, Promotion Manager, MAN Diesel & Turbo.

“It’s been great working with MAN and our shipping partners who are as committed as we are in advancing sustainable clean marine technology. Our seven methanol-fueled vessels have been operating safely and reliably since 2016, and we expect these new vessels to benefit from ongoing technological advances that will continue to optimize performance and efficiency,” says Paul Hexter, President, Waterfront Shipping. “We are proud to see 40 percent of our fleet powered by methanol-fuel technology in the coming year.”

This news is a total 837 time has been read
Tags: Waterfront Shipping to Add Four More Methanol-Fueled Tankers to Fleet