'Week of action' at ITF 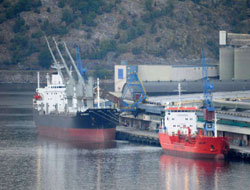 THE International Transport Workers Federation (ITF) says its Baltic Sea week of action has reached midpoint with ?inspections and successes across the region?.

Comprehensive and coordinated action right across the region

THE International Transport Workers Federation (ITF) says its Baltic Sea week of action has reached midpoint with ?inspections and successes across the region?.

In Sweden two ships were boarded by ITF activists in the port of Uddevalla on Tuesday, the Panama-flagged Rubicone and Shireen. The ITF says: ?The Rubicone"s registered owner is Italian, the beneficial owner is in Guernsey and the manager in Switzerland. The Swedish team worked around the clock trying to negotiate an agreement and at one stage industrial action by the crew was imminent. After lengthy negotiations the owner agreed to sign an ITF agreement. The crew of the Shireen say they have not received their salary and want to go home. Further investigation and negotiation is under way today. ?

In St Petersburg, Russia, the owner of the the St Vincent and Grenadines-flag Glory was has reportedly agreed to sign the SUR (Seafarers" Union of Russia) TCC agreement, which is effective from 1 October. A union official was turned off the vessel Stefanis when he tried to make an ?inspection? and is ?following the matter up with the company?.

In Estonia 36 vessels have been visited, one of which is apparently renewing its ITF approved agreement. Numerous vessels have boarded in other Baltic Sea states. ITF Maritime Coordinator Steve Cotton : ?This is robust, comprehensive and coordinated action right across the region, and again and again it is winning agreements that protect crews. These teams are doing great work.?

This news is a total 681 time has been read