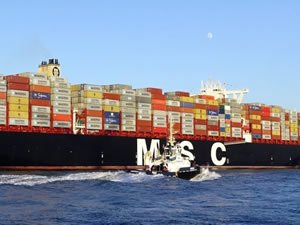 Geneva-based containerline Mediterranean Shipping Co (MSC) has embarked on a massive buying spree of secondhand containerships with Splash reporting yesterday the purchase of six German boxships ranging in capacity from from 7,849 to 8,500 teu for an en bloc price of $158m.

Additionally, MSC has reportedly purchased the 2005-built 4,800 teu boxship Baltic East from Sinokor Maritime for $12m while Braemar ACM links MSC with the acquisition of the 5,624 teu boxship Greenwich Bridge.

The vessel was sold for $3m. According to Alphaliner, Greek owner Technomar Shipping bought the 5,551 teu Rio Barrow from German owner Ahrenkiel Steamship for an undisclosed price, and Hamburg-based Okee Maritime has bought the 2008-built 1,732 teu Gluecksburg from compatriot owner Brise Schiffahrts for $5m.

The secondhand bulker sale and purchase market saw flourishing activities for yet another week with plenty of sales reported across all sectors. Buyers continue to take advantage of low secondhand price levels to secure tonnage.

According to Alibra’s latest report, capesize period rates moved lower again this week as players wait to see which direction the market will take before deciding their next move while kamsarmax and panamax sectors have been quiet as the Pacific basin suffered from the consequences of trade war between Australia and China and the market for smaller sizes was sluggish as well with falling rates.

Danish owner Celsius Shipping sold the pair to Oman Shipping for price of $17m each. Oman Shipping is on a sizeable fleet build-up path at the moment, being linked to a host of other ships this week.

The tanker market remains gloomy with Fearnleys summing up the VLCC scene the best. “A new week, a new month, alas the same poor VLCC market, with the coming winter looking more Game of Thrones than gain in freights,” the Norwegian broking house suggested. Intermodal, Lorentzen & Stemoco and Allied Shipbroking all listed the sale of the 2009-built 51,000 dwt MR tanker Atlantic Mirage.

The Japanese-built vessel was sold for $17.2m.