Where Is The US Navy Going to Get Enough BioFuel To Power Half The Fleet? Australian 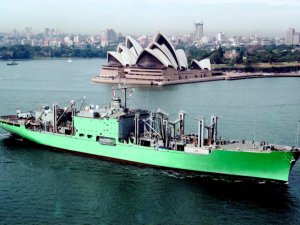 The U.S. accepted Australia’s offer to supply biofuel for its Asia-Pacific fleet, advancing the U.S. Navy’s goal of getting half its power from renewables by 2020.

The premier of Australia’s northeastern state of Queensland, Annastacia Palaszczuk, signed the deal to supply the navy’s “Great Green Fleet,” this week, according to a statement on Wednesday. The initiative is part of a yearlong exercise supplying warships with alternative fuels, according to the Navy’s website.

The accord “puts Queensland in the box seat to supply the Pacific fleet,” Palaszczuk said.

The state has “a vision for a A$1 billion ($760 million) sustainable and export-oriented ”biofuels sector,” according to a separate statement on the government’s website. The accord provides a double dividend for Queensland as it strives to become an Asia-Pacific biofuel hub and helps the U.S. Navy reduces its dependence on petroleum, the state said.

Queensland will supply the Navy’s Asia-Pacific war vessels with “drop in” alternative fuel that’s fully compatible with the ships’ petroleum-power systems, according to the Navy’s website. The fuel is a mix of 10 percent beef tallow with conventional petroleum, it said.

The initiative draws its name from the “Great White Fleet” — battleship squadrons that circumnavigated the globe and launched the U.S. as a sea power at the beginning of the 20th century. The “Great Green Fleet” is structured around aircraft carriers, some of which are nuclear-powered, according to the Navy, which added that the costs of the alternative fuels are on a par with conventional petroleum.

Virgin Australia Airlines, Air New Zealand and the Australian Navy are also assessing the potential use of biofuels from Queensland, according to the government.

This news is a total 5687 time has been read
Tags: Where Is The US Navy Going to Get Enough BioFuel To Power Half The Fleet? Australian, turkishmaritime