Who Can Afford Giant Boxships? 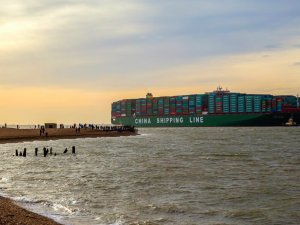 Drewry says that while the financial health of the industry is improving, there is still a long way to go.

The trend of ordering ultra large container ships seems to have picked up the pace recently as more and more lines look to expand their fleets with giant boxships. Drewry Maritime Research has investigated if the lines, many of whom are still in serious debt, will be able to both finance and pay back the mortgages on these new assets.

Drewry says that while the financial health of the industry is improving, there is still a long way to go. Record losses in the past five years and constrained operating cash flows have seen the industry pile on excessive debt, not only to finance their order books but also to raise expensive short-term capital to finance their working capital needs.

Meanwhile, the operating cash flow has remained extremely weak since the onset of the global financial crisis, barring 2010 when the carriers enjoyed the fruits of an unprecedented demand surge, led by restocking, according to the research.

It is not only the operational stress that the carriers have to deal with, Drewry says. The adverse effect on their financial positions leaves them in a precarious position, as ballooning debt and extended periods of negative cash flows exert serious strain on their business viability.

Most financial indicators point towards a greater need for the industry and in particular listed carriers to get their houses in order before it is too late. Carriers have resorted to selling stakes and raise capital not only in non-core assets but also profitable cash generating core businesses, such as NOL’s sale of APL Logistics.

The industry’s capital structure has been skewed towards debt as equity financing remains scarce, according to Drewry. Depressed stock prices made raising equity capital a non-starter and an expensive proposition, bank debt availability remained with a selected few strong players and the rest have turned to short-term debt financing and expensive bond markets.

Drewry believes that such high amounts of debt in all likelihood will damage the industry’s long-term profitability and put serious strain on shareholders as they are deprived on any return on/off capital in the absence of certain dividend pay-outs. Most of the listed companies have suspended their dividend payments and the few that have managed to retain existing pay-outs are doing so in a calibrated manner to preserve capital as sustained industry profitability still remains highly elusive.

Even as the industry is struggling to balance the need to repair the balance sheet and fund future investment requirements, Drewry recognizes a marginal improvement in the industry’s financial health over the past two years.

Still, not all are out of woods and Drewry says only strong players with healthy balance sheets both in carrier industry and non-operating owners are able to finance the bulk of the ULCV orders and the remaining will simply have to rely on long-term charters.

This news is a total 6452 time has been read