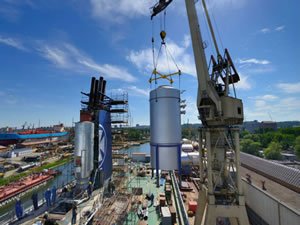 There should be no doubt about the importance of the marine exhaust gas cleaning system in helping to improve the health of those living and working around the world’s ports and harbours. There is currently no better solution.

Sulphur emissions, particularly Sulphur Dioxide (SO2), a by-product of burning fossil fuels in an internal combustion engine, is the major contributor to a raft of respiratory health problems. Yet while we now have the technology to improve the health of millions, especially those living and working around the world’s ports and harbours, there is a corner calling for these systems to be banished.The presence of high levels of SO2 and PM, especially, has such a negative effect on human health and society in general, that we as an industry, should be embracing this technology and looking at ways of improving it rather than removing it. It is counterintuitive and I think the media frenzy surrounding the washwater debate has created something of a panic devil, with us forgetting the primary reason why more than 4000 ships have the system installed.

Inhaled, sulphur dioxide quickly dissolves with moisture on the lining of the lungs and nose, burning the mucous membranes. This is clear to anyone who accidently inhales the smoke from a match being struck. Chronic, or long-term, exposure to high levels of SO2 leads to breathing problems and respiratory illnesses. Children tend to be more susceptible due to their less developed lungs.

Indeed, World Health Organisation (WHO) statistics show that 92% of the world’s population lives in places where air quality levels exceed WHO Ambient Air Quality Guidelines. These guidelines stipulate a ‘safe limit’ for fine particulate matter (PM 2.5) at 10μg/m3, but only 24 countries meet this requirement meaning that billions of people around the world are breathing in unsafe air. On average there are 1-in-8 premature deaths linked to air pollution each year – that’s 7 million deaths a year! The use of HFO with a scrubber can reduce this.

Aside from the poor respiratory health of those living around ports and harbours, areas where shipborne air emissions are documented to have a major negative impact on human health, these pollutants also, of course, contribute significantly to climate change.

Fossil fuels contain sulphur compounds and their combustion generates SO2. Further oxidation of SO2, usually in the presence of a catalyst such as Nitrogen Dioxide (NO2), forms H2SO4 (Sulphuric Acid), which returns to Earth in the form of acid rain. So, removing the sulphur compounds from the exhaust gas, reducing the potential of the formation of acid rain and the impact on humans and other living organisms, must remain the primary reason for adopting the most effective solution – the scrubber, a proven technology commonplace in land-based power plants and refineries around the world without undue concern.

Exhaust Gas Treatment Systems treat the gases from the combustion process by spraying alkaline water into the exhaust. In a seawater scrubber system, the sea’s natural alkalinity largely neutralizes the results of SO2 removal before discharge back to the sea. In a freshwater system, the washwater used for scrubbing and neutralization is treated with an alkaline solution such as sodium hydroxide (caustic soda) or magnesium hydroxide. In both cases the sulphates resulting from the SO2 removal will be discharged with the washwater to the sea, a major constituent of which is sulphate, anyway.

It is anathema to me that given the evidence and acknowledged fact that scrubbers do a far better job in removing SOx (99%), PM (94%) black carbon (60%), mitigating the risks to human health and the corresponding burden on public health services, that we are still having a debate about the efficacy of these systems.

Removal of black carbon, especially, slows down ice melt, which would ultimately contribute to rising sea levels. And, from an air quality point of view, operating a ship on HSFO in combination with a scrubber produces cleaner air emissions than operating on LSFO or MGO. Less refining also means less GHG emissions associated with HSFO vs MGO.

This was pretty much confirmed in a study published last year by Norway’s SINTEF, one of Europe’s largest independent research organisations. Chief Scientist Dr Elizabeth Lindstad concluded that from well-to-wake the continued use of HSFO or HFO with an EGCS is the most environmentally beneficial means of meeting global Greenhouse gas (GHG) emissions targets.

She stated that based on the energy consumed during the global production of distillate fuels, the continued use of residual fuel will have a positive impact on global GHG emissions, given the energy required to produce distillates would result in higher levels of CO2 being released into the atmosphere.

Yet, here we are, and despite the clear benefits to our planet and those that live on it, we find ourselves in something reminiscent of a Franz Kafka novel, with some ports and harbours banning a solution adopted for their benefit based only on blind authority, hearsay and supposition.

Due to the unfounded view by several port and maritime authorities that scrubber washwater could be hazardous to the marine environment, bans or restrictions have been imposed because they think that scrubbers pose a risk to public health and increase the rate of corrosion of their port infrastructure. ‘Could’ and ‘think’ being the operative words here.

Despite the fact that for decades shore-based industries have been operating scrubbers and discharging washwaters into rivers and waterways without much ado, then surely what is good for the goose is good for the gander. If such discharges contravened any water quality requirements in any way, then it is logical to conclude that they too would be banned from operating them.

None of the studies on scrubber washwater to date have shown that the use of exhaust gas cleaning systems poses any significant risk to the marine environment or to public health. To the contrary in fact.

If the sulphur in the sea were spread out as an even layer, the total ocean area of the world would be covered by a 5-foot (1.5m) thick layer of sulphur. And if all the sulphur in all the known oil and coal reserves were added to this layer, then, as Nyman and Tokerud stated in 1991, the thickness would only increase by the thickness of a sheet of paper. What is more, vessels fitted with scrubbers spend most of their time in international waters, where they normally produce much less SOx than compliant fuel with a sulphur content of <0.5%.

Nevertheless, there is no doubt in my mind that use of an EGCS in port would improve the lives of those living and working around them.

This news is a total 2850 time has been read
Tags: scrubbers matter