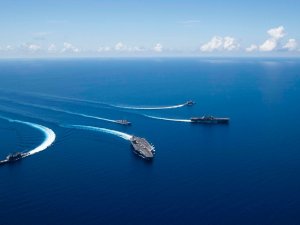 WASHINGTON — A debate on the future of aircraft carriers is roiling the U.S. Department of Defense, and it is increasingly spilling out into the open. While the debate over the efficacy of carriers in high-end conflict is nothing new, a general understanding that the DoD will not have unlimited funds with which to deter an increasingly potent China and Russia have made the questions particularly urgent.

At issue is a choice about continuing to invest in aircraft carriers and the associated air wing — the mainstay of U.S. global power projection since World War II — or to gradually reduce investment in those systems and increase investment in new capabilities such as long-range conventional hypersonic missiles.

It’s a question that Under Secretary of Defense for Research and Engineering Mike Griffin put bluntly in his remarks last month at the Defense News Conference.

“Let’s just propose a thought experiment,” Griffin said. “Which do you think the Chinese leadership would fear more: 2,000 conventional strike missiles possessed by the United States and its allies in the western Pacific capable of ranging Chinese targets, or one new carrier? Because those two things cost about the same amount of money. Those are the kinds of questions we need to be asking ourselves.”

But Griffin’s thought experiment has many assumptions that experts — not to mention large elements of the Navy and Congress — are hesitant to embrace, in part because of the questions they raise about the future of aircraft carriers. His scenario also assumes that the U.S. would, in a conventional fight with China, be willing to accept the enormous consequences of striking at the Chinese homeland and the frightening possibilities bound up in such an attempt, something many are either not sold on or think is too risky to seriously contemplate.

In Griffin’s mind, the carrier is a known quantity that potential adversaries such as Russia and China have measured and understand.

"Our carrier fleet, our Navy fleet, our space assets are determinative,” he told the crowd. “And were we to cede these things or to fail to continue to support them, we would be ceding ground to our adversaries that we cannot afford to do.

“But our adversaries know and understand these assets and they are developing, have developed, countermeasures. ... So while we can’t give up on those things, we have to look to the future.”

China, he said, has “literally thousands of conventional strike assets capable of traveling thousands of kilometers and impacting precisely,” and that threat might call for new measures to deter China.

Some experts and analysts are hesitant to embrace so-called prompt strike weapons as a valid means of deterrent, calling into question whether China would find a threat to its mainland credible in a period of heightened tension.

“The discussion about us needing hypersonic weapons to deter other countries from using hypersonics is kind of symmetrical thinking that implies we would actually use a hypersonic weapon to attack the Chinese mainland, say, either in response or in anticipation of an attack on a carrier," said Bryan Clark, a retired submarine officer and analyst with the Center for Strategic and Budgetary Assessments.. “Certainly that’s an option, but China has made clear that they would perceive that as highly escalatory.

“In essence what you are saying is that you would attack the homeland of a nuclear-equipped great power in retaliation for attacking a ship at sea. That might be the kind of thing you might do against an Iran or a North Korea even, but would you do that against China? There is a lot [of] doubt in the Chinese leaders’ minds as to whether we would actually do that because the question would become: ‘Are we really going to get into a tit-for-tat retaliation exchange on targets in your homeland in the continental United States?’

“I don’t think they find that to be a credible threat. So as a deterrence, it is of less value.”,

‘We are all in serious trouble’

The issue of managing any potential conflict with China is a serious one. Throughout the Cold War, the dynamics of managing conflict escalation were crucial to avoiding the kind of head-to-head conflict that could trigger nuclear annihilation.

For example, the U.S. trained and provided weapons to Afghan fighters when the Soviets invaded that country, but it did not have U.S. troops fighting Soviet troops because of the risk of escalation with another nuclear power.

That dynamic is still at play today, and in the event of any conflict with China, the goal should be keeping the clash localized; and deescalating rather than engaging in some apocalyptic missile fight in the Pacific, which is what Griffin’s strategy would set up.

“Griffin’s point is valid, but it is very scenario-specific,” said Michael O’Hanlon, a fellow at the Brookings Institution. “It assumes a high-end fight to be already underway. At that point, we are all in serious trouble.

“More important is deterring the high-end fight or keeping any low-level skirmish at such a level and terminating it. For those cases, the carrier may be more relevant. That’s how we have to think. We can’t always go to the all-out scenario for decision-making purposes.”

Still, if the U.S. is seeking a conventional way to respond to a Chinese conventional missile strike, placing hypersonic weapons in the Pacific should be a priority. But it won’t be as impactful as Griffin might believe.

“You want that tool in the tool kit … but the impact of those will be minimal,” Clark said. “Even if you have hypersonic weapons, they’re not a guaranteed kill, and we aren’t going to be able to field an extremely high number of these long-range boost-glide systems anyway.

“China could say: ‘That’s fine. I’m a big country, I’ve got air defense systems and I can absorb whatever you are planning with conventional hypersonic weapons.’ So either they don’t believe we’re going to use them, or that the effect if we do use them will be minimal.”

Naval aviation is also pushing back against the rising tide of criticism of its raison d'être. One of the U.S. Navy’s top aviators mounted a defense in a recent op-ed in Defense News, saying carriers continue to outclass any other weapon system or combination of systems in providing options and in survivability.

“No other weapons system or combination of lesser systems in existence or on the drawing board is as lethal, agile and resilient as a full-sized nuclear-powered aircraft carrier and its air wing,” Rear Adm. Roy Kelley said.

“Carriers deploy with the responsiveness, endurance, multidimensional might, inherent battlespace awareness, and command-and-control capabilities that America needs to prevail in great power competition," the head of Naval Air Force Atlantic said. "A carrier strike group, by its mere presence, can shape events in the nation’s favor.”

Kelly added that adversaries have long sought to challenge the aircraft carrier, but the tactics and air wings have evolved to meet the threat.

“Carriers remain relevant and potent year after year and decade after decade because they are adaptable platforms in which flexible payloads deploy,” he argued “Carrier air wings evolve, incorporating improved and revolutionary aircraft like the unmanned MQ-25 Stingray that first flew last week. The weapons carried by those aircraft evolve even faster, keeping carrier strike groups dominant over realized and potential threats.”

Ultimately, however, it’s unlikely the solution will be an either/or, said Tom Karako, an analyst with the Center for Strategic and International Studies who specializes in missiles.

“This debate has been around a long time, and what the military has found time and again is that first of all you have to get stuff there, and that’s why the U.S. tends to be platform-heavy,” Karako said. “It’s one thing to say, ‘Let’s just shoot a bunch of missiles from Hawaii,’ but it’s not just about shooting missiles — you have to have the complete kill chain.

“You have to know where they are going to go, and you have to hope your target hasn’t moved since you pulled the trigger. So it’s probably prudent to have a mix of things.”

Because one of China’s goals is, for the most part, to project its influence regionally, the country’s investment in missiles makes sense, whereas America’s investment in air power and associated electronic warfare, surveillance and aerial networks also makes sense, even though it is more expensive.