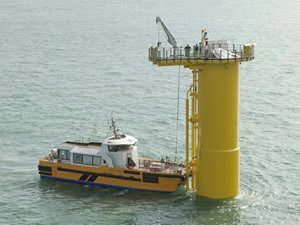 SEACOR Marine has entered into an agreement with Compagnie Maritime Belge (CMB) to sell its wholly-owned subsidiary Windcat Workboats and its crew transfer vessel (CTV) business.

As consideration for the sale, at the closing of the transaction, CMB will pay SEACOR Marine £32.8 million, and assume the circa £20.4 million of debt outstanding under Windcat’s existing revolving credit facility.

The transaction is expected to close on or prior to 12 January 2021.

The existing Windcat management team will continue to lead the company after the completion of the transaction.

Windcat owns and operates, directly or through its joint ventures, a fleet of 46 CTVs in the European offshore wind sector. It is headquartered in Lowestoft, the UK, and IJmuiden, the Netherlands, and has joint ventures with FRS Windcat Offshore Logistics in Germany and TSM Windcat in France.

“The acquisition of Windcat fits into CMB’s strategy to diversify its business portfolio into the fast-growing offshore wind market and scale up the deployment of hydrogen ships and engines,” said Alexander Saverys, CMB CEO.

“CMB wants to grow Windcat’s business by building on its strong market-leading European platform whilst expanding into new European and non-European markets, diversifying into the owning and operation of Construction Service Operation Vessels and Service Operation Vessels (CSOVs and SOVs), and deploying hydrogen engines developed by CMB.TECH onboard the existing and newbuilding Windcat fleet.”

The first hydrogen-powered CTV Hydrocat is expected to be operational as early as June 2021. The construction of hydrogen refueling stations in dedicated Windcat ports will be investigated as well, CPM said.