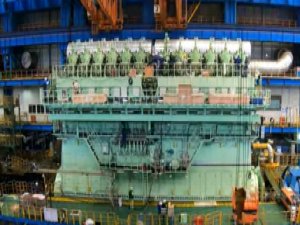 Winterthur Gas & Diesel (WinGD) has shared a time-lapse video of the construction of a 12X92DF engine built by CSSC-MES Diesel in Shanghai.

This twelve-cylinder version of the 92cm bore X-DF engine is the largest and most powerful gas and dual-fuel engine ever built, according to WinGD.

The Switzerland-based company said the engines will bring “a new level of environmental sustainability to the containership segment.”

X-DF engines comply with IMO Tier III limits on NOx in gas mode and IMO Tier II in liquid fuel mode, both without EGR or SCR. They would comply with the upcoming emissions regulations due to the low NOx and SOx emissions from burning LNG in the X-DF engine.

Back in 2017, French shipping major CMA CGM chose WinGD’s 12X92DF engines for nine of its 22,000 TEU containerships. The USD 1.2 billion worth containerships are scheduled to start joining the fleet from the end of 2019 extending into 2020.

Watch the engine construction timelapse in the video below:

This news is a total 1931 time has been read
Tags: Dual Fuel, Engine, Video, WinGD.