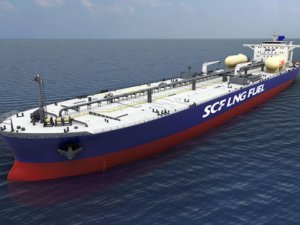 Under a contract signed in March 2017, SCF Group’s series of four LNG-fuelled ships will be propelled by seven-cylinder, 62 cm bore type 7X62DF engines from WinGD’s X-generation.

Featuring 114,000 dwt, the Ice-Class IA tankers will be built by South Korea’s Hyundai Heavy Industries (HHI) at its Samho shipyard, while the 7X62DF engines will be built by HHI’s Engine & Machinery Division (HHI-EMD) in Ulsan.

The 7X62DF engines are rated 13,800 kW at 86 rpm and designed to operate on a choice of LNG, HFO, distillate or hybrid liquid fuels. They will comply with IMO Tier III limits for oxides of nitrogen (NOx) in their gas fuel mode, and with IMO Tier II when burning liquid fuel. To enable IMO Tier III compliance on liquid fuel operating mode, the contract also specifies the supply of low-pressure selective catalytic reduction (SCR) after treatment systems for the 7X62DF engine, according to WinGD.

SCF’s LNG-fuelled Aframax crude oil tankers, which will be 250 meters long and 44 meters wide, are scheduled to operate primarily in the Baltic and North Seas.

The first vessels from the batch are expected to be delivered from the third quarter of 2018.

This news is a total 888 time has been read
Tags: WinGD to Propel Sovcomflot’s LNG-Fuelled Aframaxes