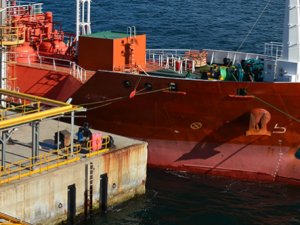 North America could take a larger share of the global bunker market in the future due to its capabilities to supply ultra low sulfur fuel oil (ULSFO) components and gas oil, according to Wood Mackenzie.

North America is hence underweight in terms of bunker supply, as it has a greater share of global trade, Gelder added, speaking at the American Fuel & Petrochemical Manufacturers (AFPM) annual meeting in San Antonio, Texas, on March 20.

“North America currently has a lower share of the global bunker market than its share of global trade,” according to Gelder.

This is a reflection of the current global bunker fuel market being dominated by high sulfur fuel oil (HSFO), which is more costly in the United States than in Europe. However, Gelder emphasized that North America has a high global share of the global gas oil bunker market, due to it being an Emissions Control Area (ECA) and a low-cost source of middle distillates.

“Any switch in bunker fuel towards distillate could hence increase North America’s bunker market, as it is one of the lowest cost providers of such fuel. The forthcoming International Maritime Organisation’s (IMO) legislation on ship emissions under MARPOL Annex VI could provide such an opportunity,” Gelder pointed out.

In October 2016, the IMO Marine Environmental Protection Committee agreed to implement the 0.5% sulfur limit for marine fuels in 2020, rather than defer enforcement to 2025.

According to a separate study by Wood Mackenzie, ULSFO could emerge as the lowest cost compliance option, but sufficient volumes of ULSFO are not expected to be available at current fuel oil price levels, with volumes limited to less than 1.0 million b/d in 2020. Nevertheless, there is considerable uncertainty regarding availability and this is likely to evolve during the initial years of implementation, according to the firm.

Gelder’s technical paper affirms there are various options for compliance, with the lowest cost option of continued use of HSFO requiring ship owners to invest in on-board scrubbing, as Wood Mackenzie does not expect sufficient volumes of ULSFO to be available at current fuel oil price levels.

“Considering these factors, the market outlook is uncertain, but there will be a shift away from HSFO to gas oil by the shipping sector,” Gelder noted.

In order for North America to play a bigger role in the global bunker market, it “will require development of the necessary port and bunkering infrastructure, with the expectation that North America can punch above its weight in global bunker supplies post 2019 if it focuses on capturing the forthcoming opportunity,” Gelder concluded.

This news is a total 1317 time has been read
Tags: Wood Mackenzie: North America Should Take Larger Share of Global Bunker Market