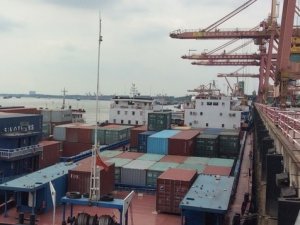 Wuhan is positioned to become an industrial hub along the Yangtze River portion of the Belt and Road initiative and is part of COSCO Shipping Lines' (COSCON) plan to build an integrated logistics hub around its terminal in Yangluo port.

The first phase of the project was opened in December 2017 and part of the second phase will be completed in mid-2021, with trial operations to begin in August 2021, while construction of the entire project will be finished in 2022.

It has been said that for every 1% increase in the rate of rail-shipping combined transportation, the overall regional transportation efficiency can increase by 10%. In 2019, 33,000TEU were delivered by rail from Yangluo port.

COSCON is investing CNY2.2 billion (US$320 million) in the second phase of the project, will have three components, which involve designing a terminal with annual capacity of 750,000TEU, converting four multi-purpose berths to berths for container vessels, an 400,000TEU/annum unloading/loading facility for river-rail transportation The hub will also offer auxiliary services such as container washing, storage and repair.

A railway line will also be built to connect Yangluo to the Xianglushan Station of the Jiangbei Railway, which is linked to all domestic freight railways.

Wuhan COSCO Shipping Port Terminal, which operates COSCON’s Yangluo terminal, said that the project will cut the costs of combined river-and-rail transport to and from the industrial city.