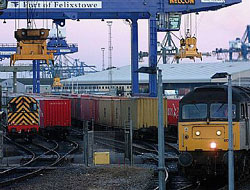 Port of Felixstowe is due to commence works to upgrade its South Rail Terminal in late December 2008.

Port of Felixstowe is due to commence works to upgrade its South Rail Terminal in late December 2008.

In order to further improve the efficiency and reliability of its rail operations, the Port of Felixstowe is due to commence works to upgrade its South Rail Terminal in late December 2008.

Work will commence on 27th December 2008 on the major refurbishment of Line 1 at the South Rail Terminal, with the entire 465 metres of track being replaced. This upgrade is expected to be completed by 5th January 2009.

Further critical track upgrades, in co-operation with Network Rail, are also being undertaken at the South Rail Terminal on the curve of the track by the Felixstowe Seafarers" Centre, alongside Carr Road.

?We are committed to optimising environmentally-friendly rail transport opportunities for our customers. We have experienced very high volumes of rail traffic in recent months ? breaking through the 9,000 rail moves per week threshold for the first time ever in September this year ? and this highlights the need to improve freight capacity on the rail network so that more traffic can be distributed by sustainable modes.?

The South Rail Terminal was extended by 39 metres on all three lines earlier in the year, meaning that it is now able to accommodate trains up to 22 wagons in length.

The Port has also made a significant investment in providing the latest state-of-the-art equipment for the Terminal. A brand new rail-mounted gantry cranes became fully operational in October 2008.