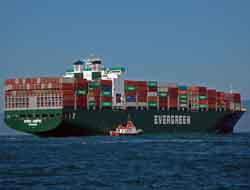 DCT Gdansk, the new deepwater container terminal for the Baltic under construction in Poland, has taken delivery of the first of three Panamax ship-to-shore cranes and 2 of five rubber-tyred gantry cranes from Liebherr Cranes in the Irish Republic.

DCT Gdansk SA, the new deepwater container terminal for the Baltic under construction in Poland, has taken delivery of the first of three post-Panamax ship-to-shore (STS) cranes and two of five rubber-tyred gantry (RTG) cranes from Liebherr Cranes of Killarney in the Irish Republic. The STS crane, which arrived at the facility on the vessel Traveller on 26 January, will be assembled on site ready to handle the first vessel in June this year, when DCT Gdansk Phase 1 begins commercial operations. Delivery of the remaining STS and RTG cranes, also ordered from Liebherr last year, will take place during the spring. The Liebherr STS cranes incorporate Bromma twinlift spreaders and have a lifting capacity of 60 tonnes. A 52m outreach means that they will be capable of handling ships carrying containers 19-across on deck.

The Emergency Response Service (ERS) of Germanischer Lloyd has taken on its 500th ship: The "Histria Perla", a chemicals tanker with a tonnage of 40,471 dwt was built in 2005 at the Constantza Shipyard in Romania and classed by Germanischer Lloyd. Nicolae Berechet, Technical Director of Histria Ship Management, received the 500th ERS certificate at the company's headquarters in Constanta, Romania. Accidents, collisions, oil spillages, groundings, on-board fires - the Emergency Response Service has been helping ships in distress for thirteen years. The service is triggered by telephone, using a special emergency number. The emergency call is received by the "Maritime Rescue Coordination Centre" of the German Maritime Rescue Service in Bremen. From there, the ERS team at Germanischer Lloyd is alerted. All further exchanges of information with the shipping company and the crew are via phone, fax, telex and email connections reserved for the purpose.

To enable certain UK P&I Club Members to meet their local European regulatory requirements, a new London-based mutual association, will be underwriting P&I risks from 20th February 2007. The United Kingdom Steam Ship Assurance Association (Europe) Limited will operate as a subsidiary of the Bermuda-based UK P&I Club. UK (Europe) will allow the UK Club to continue to insure Members whose ships fly the flags of certain states, such as Spain and Italy, where local insurance regulations require the insurer to possess an EEA regulatory "passport". The UK Club created this subsidiary by reinstating the underwriting licence of the Sunderland P&I Club which it took over on 20th February 1991. The UK Financial Services Authority has approved the new arrangement as providing the necessary rights to trade into relevant European countries in the 2007 policy year. The UK P&I Club and UK (Europe) will be run on a unified basis. The rules and cover will be identical for both associations for all Members.

CREATE3S is the title of a new research project funded by the European Commission. Bringing together some of the leading companies in short sea shipping and ship design, CREATE3S aims to develop a new generation of short sea vessels utilising advanced design and manufacturing techniques, enabling Europe to strengthen its shipping and shipbuilding competitiveness. The project is being coordinated by Samskip Multimodal Container Logistics BV in Rotterdam and the company says it intends to be a prominent user of the concept. With trade between European countries increasing rapidly year on year, great demands are being made on Europe’s transport infrastructure.