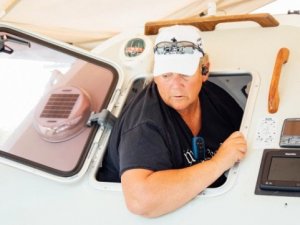 Madsen, 60, had hoped to become the first paraplegic and oldest woman ever to complete this three- to four-month feat.

According to her wife, Debra Madsen, and documentary filmmaker Soraya Simi, Angela Madsen last checked in via satellite at 0900 on Sunday morning. In a planned evolution, Angela intended to go into the water to reshackle her bow sea anchor bridle, which had become disconnected.  She did not check in again for several hours, and her shore team called for assistance.

A search and rescue aircraft flew to the scene to investigate, and a nearby merchant vessel diverted to assist. They confirmed that Madsen was deceased upon arrival.

Madsen sustained a back injury during her time in the Marine Corps, and a failed surgical intervention left her legs paralyzed. She turned her attention to adaptive sports, participating in three Paralympics and earning the bronze medal in both rowing and shotput.

Angela Madsen was a veteran ocean rowing crewmember, and over the years she joind in long voyages in the Atlantic, the Indian Ocean and the Pacific, along with a circumnavigation of Great Britain. This voyage was her second attempt to reach Hawaii on her own.

"To row an ocean solo was her biggest goal.  She knew the risks better than any of us and was willing to take those risks because being at sea made her happier than anything else. She told us time and again that if she died trying, that is how she wanted to go," wrote Soraya Simi and Debra Madsen in an obituary.

Angela Madsen's family are making repatriation arrangements for her remains with support from the veterans' group Wine Country Marines. An effort is under way to retrieve her boat..

This news is a total 1104 time has been read
Tags: World Record-Holder Angela Madsen Dies During Solo Ocean Row