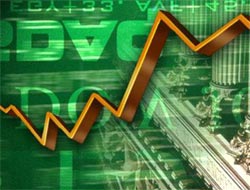 World stocks rose from this week?s 7-week low on Thursday as banking shares recovered after a heavy sell-off.

World stocks rose from this week"s 7-week low on Thursday as banking shares recovered after a heavy sell-off.

World stocks rose from this week"s 7-week low on Thursday as banking shares recovered after a heavy sell-off, while European government bonds tumbled on concerns the countries may borrow more to boost the economy. The yen rose toward a 13-1/2 year high against the dollar and a seven-year peak versus the euro, while sterling fell again toward the previous day"s 23-year low against the dollar. Wall Street jumped from a two-month low on Wednesday, helped by surprisingly healthy earnings reports from IBM and Apple and financials including Northern Trust , the custody bank and asset manager.

In Europe, major gainers were banking and energy stocks.

?The market is yo-yoing again. The good news is it hasn"t touched new lows, and all the bad news is already priced in,? said Marc Touati, chief economist at Global Equities in Paris. MSCI world equity index rose 1 percent, having hit its weakest since early December on Wednesday.

The dollar edged up a quarter percent against a basket of major currencies.

Government bonds were under pressure across the board as investors unwound safer trades as stocks rebounded.

Also pressuring sovereign debt is concerns that the governments would have to borrow huge amounts to help fund their package designed to support the economy.

Worries about fiscal balance have driven the cost of insuring sovereign debt of many major economies to record highs in recent sessions, according to credit default swaps data.

Spreads of French 10-year bonds over German Bunds are around 60 basis points, their widest since the introduction of the euro.

Portugal became the third euro zone economy this year to be hit by a ratings downgrade late on Wednesday, as Standard & Poor"s cut its long-term rating to A+ from AA-, citing slow economic reforms and deteriorating public finances.

The 10-year Portuguese/Bund spread hit a new wide of 153 basis points on Wednesday.

This news is a total 589 time has been read