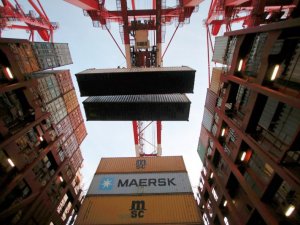 A.P. Moller-Maersk A/S, the owner of the world’s biggest container shipping line, saw its shares fall on Wednesday as the outcome of the U.S. presidential election fanned concern there will be a shift toward policies that are hostile toward global trade.

Maersk sank as much as 5.6 percent to trade 3.4 percent lower at 9,215 kroner at 11:29 a.m. in Copenhagen. The company’s Maersk Line unit commands almost 16 percent of the global market for transporting goods by sea. Executives at Maersk have already signaled alarm at the prospect of a world in which some of the biggest political powers adopt a more protectionist tone in their trade policies.

“The risk of increased protectionism may derail a recovery in global trade,” David Kerstens, an analyst at Jefferies International, said in a note on Wednesday. He listed Maersk as one of the companies “most affected” by the threat.

Investors woke up to a mass selloff across markets amid panic and confusion over what a White House led by Donald Trump will mean for trade and geopolitical stability. The Republican nominee’s victory confounded expectations built on pre-election polling.

A Trump presidency would also be bad news for the Danish economy, where Maersk is the biggest company by revenue, according to Danske Bank. About one-third of Denmark’s current account surplus is directly dependent on the U.S. and global sea trade, “so an anti-trade policy will clearly be a problem,” Las Olsen, chief economist at Danske in Copenhagen, said in a note.

“It’s uncertain what the fate of TTIP will be,” Rasmussen said. He went on to underscore his nation’s reliance on well-functioning trade relations. “Denmark is a country that has generated all its wealth through trade with others.”

According to Helge Pedersen, chief economist at Nordea in Denmark, Trump’s victory may trigger a U.S. recession in connection with the trade war that could ensue from his policies.

The U.S. election outcome hits Maersk as the company struggles with a market already buffeted by overcapacity. Chief Executive Officer Soren Skou said last week he’s willing to lose money in the short term in exchange for longer-term gains in market share. The industry must consolidate in order to cope with the headwinds it faces, he said then.

This news is a total 2318 time has been read
Tags: World’s Biggest Shipping Line Falls Amid Fears of Trade Wars