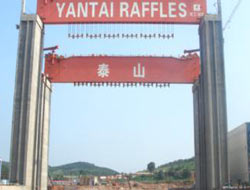 Yantai Raffles Shipyard Limited recently announced that the construction of its revolutionary gantry crane, which will be used to build semi-submersible rigs and other huge offshore vessels, has just entered into its final phase and will see its full completion in October 2007.

Its second 4,800 metric-tonne beam, has been hoisted to its final position at 118 meters above the dock floor, which signals the
commencement of a series of tests as required by the Chinese authorities.

The gantry crane’s two beams, designed to lift 10,000 metric tonnes each, will be tested to see if they will be able to lift 20 percent above its designed lifting capacity using ready-cast concrete blocks.

Said Mr Brian Chang, Chairman of Yantai Raffles Shipyard Limited: “With the world’s largest gantry crane, Yantai Raffles has made a significant breakthrough in the building of semi-submersible rigs. This revolutionary facility will save a significant number of man-hours in the building of semi-submersibles and FPSOs and will completely change the way these huge offshore vessels are built.

"This new process will enable the Group to take on bigger and far more complex projects, as it significantly reduces production time and safety issues whilst increasing quality standards.”

Conventional methods of rig building, often rigged with complex integration issues and high costs, will soon be things of the past, said YRS. With more vessels becoming more technologically-advanced and sophisticated, it is mission-critical that today’s shipyards be supported by a highly-skilled engineering force, cutting-edge facilities and superior technology.

“For the last 7 years, several Chinese and foreign companies have been involved in the design, construction, supply, commission and testing of this gantry crane. We expect these tests to be completed by October 2007 and look forward to its full operation soon after,” Mr Chang said.

Measuring 130 metres in length and 122 metres in height, the gantry crane has already received strong interest from the Group’s customers. Already, it is expected to lift 10 deckboxes for the construction of various offshore vessels.