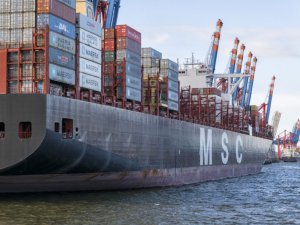 The world’s No. 2 container shipping line MSC said on Wednesday it would stop taking new bookings for Iran due to the decision by the United States to re-impose sanctions on Tehran after withdrawing from the international nuclear deal.

In a note to clients, privately held MSC said it was “ceasing to provide access to services to and from Iran,” adding that they would “conclude this period with the minimum disruption” to their customers’ business.

“While MSC is not accepting bookings for shipments originating from Iran, or destined to Iran, we will continue to carry certain legally acceptable cargoes during the wind-down period, notably for importation of foodstuffs,” Switzerland-based MSC said in its note.

The 2015 nuclear agreement, worked out by the United States, five other world powers and Iran, lifted sanctions on Tehran in exchange for limits to its nuclear program.

U.S. President Donald Trump has also instructed his administration to re-impose U.S. sanctions after a winding down period.

Last week MSC and the world’s No.1 container group Maersk Line were reviewing their Iran operations.

Both MSC and Maersk have serviced Iran via third-party feeder ships from transhipment hubs in Jebel Ali in the United Arab Emirates.

Iran relies on seaborne trade for both imports as well as for sales of its goods apart from oil, and the country had struggled with logistical difficulties before international sanctions were lifted in 2016.

Iran’s port operators and shipping sectors, including top cargo operator the Islamic Republic of Iran Shipping Lines (IRISL) and oil tanker group NITC, will once again be blacklisted on Nov. 4 by Washington.

Danish oil product tanker operator Torm said on Tuesday it had stopped taking new orders in Iran due to the impending U.S. sanctions.

This news is a total 822 time has been read
Tags: World’s No. 2 Shipping Line MSC Stops New Bookings for Iran