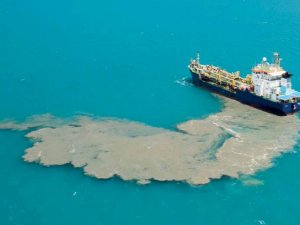 In order to prevent unacceptable new stress on this already-vulnerable ecosystem, WWF is calling on the Australian government to ban all dumping of dredge spoil in the Great Barrier Reef.

The dumping of waste from port expansions within Australia’s Great Barrier Reef could cause severe damage and have ”devastating impacts” to this World Heritage-listed environmental system, according to the new report commissioned by the World Wide Fund for Nature (WWF) titled ”The Great Barrier Reef Under Threat.”

In order to prevent unacceptable new stress on this already-vulnerable ecosystem, WWF is calling on the Australian government to ban all dumping of dredge spoil in the Great Barrier Reef.

”The Great Barrier Reef is one of the planet’s richest ocean habitats, home to endangered species, a valuable economic asset for Australia, and a natural treasure for the whole world.Turning the reef into a dumping ground is the wrong choice for the environment and makes no business sense, particularly to build ports that are unnecessary,” said WWF International Director General Marco Lambertini.
Port expansion plans call for the dredging of approximately 51 million cubic metres of the ocean floor. Without new laws to ban sea-dumping, WWF says much of that waste could be dumped in the Great Barrier Reef waters, where it can cause damaging plumes of sediment that can drift for up to 80 kilometres. Dredging and dumping can smother corals and threaten the survival of endangered species like marine turtles, according to WWF.

Multi-national coal companies are seeking to more than double coal export capacity in the state of Queensland, even though the state’s existing coal port capacity sits unused one-third of the time, the analysis by independent consulting firm Dalberg Global Development Advisors found.

Under current plans, Queensland’s coal export capacity would increase to 637 million tonnes annually, when near-term forecasts predict that Australia as a whole will export significantly less than that, says WWF.

According to the WWF report, many prominent banks have backed away from financing coal terminals in the reef due to concerns over environmental impacts. Back in September, companies working on the Abbot Point Port expansion project were prevented from dumping 3 million cubic meters of dredged sand into the Great Barrier Reef area after environmentalist groups raised concerns about the effect of the dumped waste on the Reef.