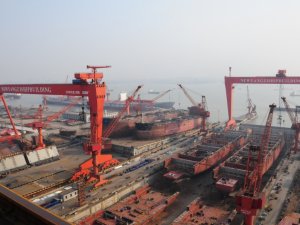 The revenue increased 7% to RMB 15.4 billion (USD 2.45bn) in 2014, with shipbuilding-related segment as the core revenue driver, contributing to about 89% of the total revenue.

Singapore-based Yangzijiang Shipbuilding has reported net profit attributable to shareholders of RMB 3.48 billion (USD 555.2m) for the twelve months ended December 2014, a 13% increase year-on-year spurred on by higher revenue and diversified portfolio, the Chinese shipbuilder said in a stock filing.

The revenue increased 7% to RMB 15.4 billion (USD 2.45bn) in 2014, with shipbuilding-related segment as the core revenue driver, contributing to about 89% of the total revenue.

The shipbuilding sector reported a RMB 13.7 billion revenue (USD 2.18bn) in 2014, an increase of 6.5% year-on-year, primarily due to the higher valued 10,000 TEU container ships delivered during the year, according to the filing.

A total of 33 vessels were delivered in 2014 according to schedule, compared to 34 vessels delivered in 2013. Other complimentary businesses such as shipping & logistics and trading also contributed positively to the revenue of the group.

Compared to the construction and delivery of the higher margin shipbuilding contracts secured prior to financial crisis in 2013, vessels delivered in 2014 had relatively lower contract price and resulted in lower margin, the company says, declining from 27% recorded in 2013, to 19% in 2014.

The lower shipbuilding margin also weighed down the overall gross profit for the group, which declined 13% to RMB 4.1 billion (USD 654m).

The company has also recently embarked on the production of liquefied gas carriers, announcing the new orders for two 27,500 cbm LNG carriers with a total contract value of USD 135 million, and its research and product development for LEG vessels are ongoing.

”While there are early signs that the market might have entered an initial stage of recovery, views on the near term outlook are mixed, and the shipbuilding industry in China has shown diverse performances,” Ren Yuanlin, Executive Chairman of Yangzijiang, said.

”With the White List of qualified shipyards that the Chinese government rolled out in September 2014 and several other policies designed to promote the industry upgrading and consolidation, Yangzijiang will be in a favorable position as a distinct leader and outperformer.”

This news is a total 2880 time has been read
Tags: china, Singapore, Yangzijiang Shipbuilding