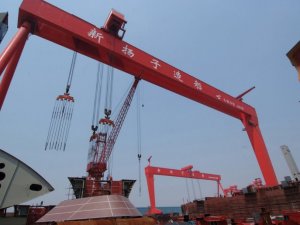 Yangzijiang Shipbuilding, the biggest private shipyard in China, is going to let go 2,000 employees by the end of 2016 in order to cut cost amid the doldrums in the shipbuilding sector, Chinese financial media Caixin has reported.

Yangzijiang Shipbuilding currently has orders for 89 vessels made up of 38 containerships, 47 bulk carriers, two LNG carriers and two VLGCs.

It has since suffered 11 vessel cancellations in the first half of 2016, eight of them already under construction.

When contacted by Splash, an official at Yangzijinag confirmed that the company is laying off employees, but didn’t reveal the scale of the job cuts.

This news is a total 57107 time has been read
Tags: Yangzijiang Shipbuilding to axe 2, 000 workers, turkıshmaritime