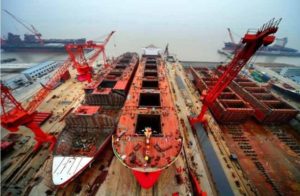 One of the orders for the 82,000 dwt bulker was placed is Japan’s Kambara Kisen Co, which has its own shipbuilding company under Tsuneishi Holdings Corporation. The other 82,000 dwt bulker will be built at Yangzijiang’s Taicang yard, where Jiangsu Yangzi-Mitsui Shipbuilding Co is based. The customer for the pair of 325,000 dwt bulkers is also from Asia.

“As shipowners gradually firm up their plan on how to cope with the IMO 2020 emission rules, we saw a surge in enquiries for the building of new vessels,” said Ren Letian, ceo of Yangzijiang.

“We have successfully turned several of these enquiries into new orders, including orders from Japanese shipowners who are well-known for their high standard on quality,” Ren said.

“We are also working on the negotiations of other potential orders. As market sentiment recovers, Yangzijiang is in an advantageous position to ride the momentum and build up our orderbook,” he added.

The new order announcement came as Yangzijiang’s share price on the Singapore Exchange (SGX) took a hit after the group’s executive chairman Ren Yuanlin took a leave of absence from 9 August to assist Chinese authorities in a confidential investigation.

Yangzijiang had confirmed that neither Ren himself nor any of the other company directors are the subject matter of the investigation.