Yards may be forced out of market 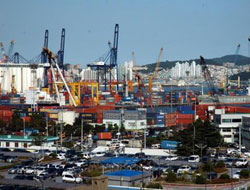 South Korea is promising to take a tough approach to failing shipbuilding companies.

South Korea is promising to take a tough approach to failing shipbuilding companies.

South Korea is promising to take a tough approach to failing shipbuilding companies, in a move which may force some yards out of the market early next year.

The nation"s financial watchdog plans to introduce more stringent banking guidelines in January in a bid, initially, to halt loan extensions to non-viable companies in the construction and shipbuilding industries.

Within shipbuilding, the Financial Supervisory Service said 26 small and medium-sized yards would come under scrutiny for restructuring.

In some cases, it is thought this could result in liquidation or the scaling down of operations.

The Financial Supervisory Service"s governor Kim Jong Chang issued a statement which indicated that distressed construction and shipbuilding companies, many hit hard by the economic slowdown, would be the priority for restructuring.

He noted that ?swift action on these companies was needed to pre-empt market uncertainty and boost investor confidence.?

A seven-member task force would come up with guidelines under which creditor banks will be able to assess the viability of businesses.

Those companies who receive the worst credit rating from banks would face ?restructuring,? Mr Kim said.

As a result, it is speculated that some construction and shipbuilding companies could be forced to leave the market as soon as next month.

Earlier in December, the Financial Supervisory Service had made it clear that the financial regulator would encourage creditors to accelerate the downsizing of ailing businesses.

This news is a total 689 time has been read