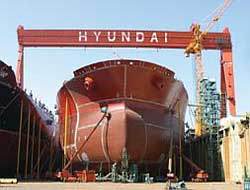 "Demand from shipyards is basically the only bright spot for steelmakers this year because supply still lags demand," Kim Yong Soo, an analyst at SK Securities Co., said in Seoul. "For shipbuilders, it's going to mean higher costs."

"Demand for the steel material by shipyards will remain strong until next year because of the backlogs," said Song Sang Hoon, an analyst at Kyobo Securities Co. in Seoul.

The Korean yards are fulfilling orders won in 2006. Ulsan- based Hyundai, Seoul-based Samsung and Daewoo said they will buy from Asian companies, including Posco and Dongkuk Steel, which gets half its sales from plates.

Falling demand may force Europe's ArcelorMittal and ThyssenKrupp AG to write down as much as US$6.09 billion, Tim Huff, a Royal Bank of Scotland Group Plc analyst, wrote Jan. 6. Nippon Steel, the world's second-largest maker, may double output cuts by closing a furnace, executives said today.

The three yards, with US$135 billion of contracts for vessels and deep-sea platforms, are maintaining orders even as rivals fail. C&Heavy Industries Co., a South Korea shipbuilder that has yet to deliver its first vessel, is seeking protection from creditors to avoid bankruptcy.

Orders for new vessels, which take as long as three years to build, slowed 42 percent in the first 11 months of 2008 as world trade slumped, hurting small and new yards.

About 30 percent of Chinese orders won in 2007 were canceled, said Cho In Karp, an analyst at Good Morning Shinhan Securities Co. in Seoul.

About half of the 30 shipbuilders in South Korea may close or move into another business, he said.

"Everyone seems to agree that it'll be tough through the first half of 2009," Kim Tae Hoon, vice president of Hanjin Shipping Co. said in Seoul. "We are hoping the market will start to pick up slowly from the second half."

This news is a total 3734 time has been read