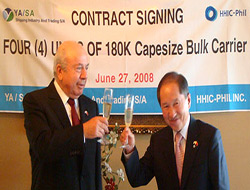 No price details were disclosed but recent newbuilding prices for similar ships have ranged between $94m and $99m.

Yasa joins three other owners in ordering capesizes at Hanjin. Adani Shipping and Eregli Denizcilik each have capes on order, while Dubai"s Emarat Maritime has a trio of ships on order.

The Turkish owner has a further 13 bulkers on order at yards in China and Japan ranging from handysize all the way up to capesize for delivery by 2012.

These include a 207,000-dwt bulker at Universal Shipbuilding due in October this year, three Supramaxes at Mitsui Engineering & Shipbuilding and three 83,000-dwt Kamsarmaxes from Sanoyas Heshino Meisho.

Japan"s Tsuji Heavy Industries is slated to deliver six handysize bulkers to Yasa from its facility in China from February 2010 to January 2011. 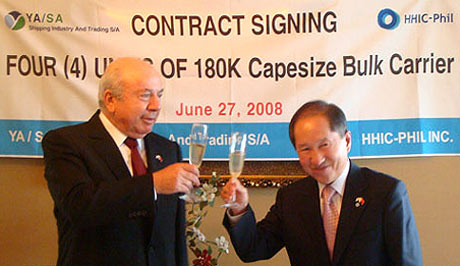 Yasa and Hanjin officials totast the contract signing in Turkey