YML service at Istanbul and Izmir 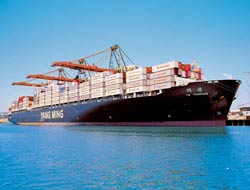 With its extensive fleet and excellent infrastructure, the Far East service-provider Yang Ming Line which calls at Istanbul and Izmir has now added a new call at Gemlik.

With its extensive fleet and excellent infrastructure, the Far East service-provider Yang Ming Line which calls at Istanbul and Izmir has now added a new call at Gemlik.

Yang Ming Line will be offering export and import shipping from Gemlik for the industrial region of Bursa and its environs.

The weekly Yang Ming Line (YML) Far East service from Istanbul and Izmir will follow a Singapore-Hong Kong-Marport-Haydarpa?a-Gemlik-Izmir-Singapore route from now on. The service will be provided with six vessels having a transit time of 20-25 days for import and export shipments. The first vessel in the Yang Ming Line service will call on the port of Gemlik at the beginning of April.

The Gemlik stop is important for regional industry

The refrigerated container-reefer shipments so crucial to food exporters now reach destination ports from Gemlik in a shorter time thanks to the direct Yang Ming Line service. Reefer cargo accounts for a significant percentage of exports to the Far East, primarily to ports in Hong Kong, China and Vietnam. Export shipments are also important for the mining sector, especially for chrome and block marble. Import shipments made via this direct service to the Gemlik port are important for the textile and tire sectors as Rubber and fibers are the primary imported raw materials.

Yang Ming Line represented by Egekont offers competitive prices with a large fleet and infrastructure. Shipments from Turkey reach their destination quickly and there is weekly service from Istanbul every Thursday, Gemlik every Saturday and Izmir every Sunday. Furthermore, shipments can be made to other ports in the Far East with transfers in Singapore and Hong Kong.

This news is a total 1224 time has been read