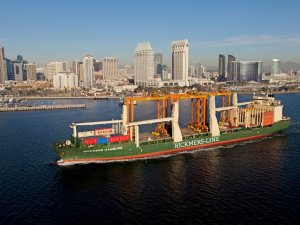 The takeover, which was announced on February 9 and received clearance from antitrust authorities on March 7, also includes the entire operating business of Rickmers’ subsidiaries, MCC Marine Consulting & Contracting, a bunker and chartering broker, and NPC Projects, which offers a heavy lift tramp service.

“The change will have no impact on the former Rickmers-Linie’s workforce, routes and tonnage under long-term charter. All Rickmers-Linie offices remain in place as do NPC subsidiary offices. Rickmers-Line will conduct business on behalf of the carrier company RZ Carrier,” Rickmers-Line said in a statement.

Coinciding with the closing of the acquisition, Zeaborn has acquired Rickmers Hamburg, a multipurpose (MPP) heavy lift vessel, from its previous owners.

The vessel will operate for RZ Carrier under the brand of Rickmers-Line and after a docking in Asia will rejoin the Pearl String Liner Service of Rickmers-Line at the end of May 2017, according to Rickmers-Line. The parties have agreed not to disclose the purchase price.

The 30,000 dwt Rickmers Hamburg was built at China’s Jinling Shipyard Jiangsu in 2002 and has since operated in the Pearl String Liner Service.

This news is a total 676 time has been read
Tags: Zeaborn Completes Rickmers-Linie Acquisition