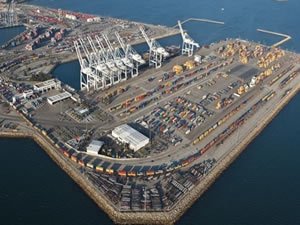 The Israeli Zim Line announced a first with its plans to begin offering direct service to the Jebel Ali port in the United Arab Emirates (UAE) as the latest demonstration of the peace dividend coming from the historic agreement between the two countries.

Zim announced that it would begin providing direct service to the UAE for customers in Israel and the Eastern Mediterranean.

Two existing ZIM services will now offer service to and from the Jebel Ali port in the UAE. Zim will begin accepting cargos bound for the UAE aboard its ZIM India - East Med Express (ZIE).

Cargo will be loaded in the UAE bound for Haifa on the ZIM Israel India Service (ZII). “We are pleased to offer our customers direct service to and from the UAE, and look forward to future growth in this trade, as well as a further increase in the scope of our service portfolio,” said Rani Ben Yehuda, EVP of Zim’s Cross Suez and Atlantic BU.

The announcement that Zim would begin transporting cargo between the UAE comes last than two weeks after MSC carried the first-ever direct cargo from the UAE to the port of Haifa.

The arrival of the MSC Paris at Haifa was hailed as a historic moment both in the shipping industry and the history of both countries.

The maritime industry has moved quickly to benefit from the new agreements between Israel and the Arab nations. DP World, one of the largest global logistic companies and operators of ports quickly entered into several agreements that can lead to investments in Israel. DP World recently signed a Memorandum of Understanding (MOU) with Bank Leumi, Israel's oldest banking corporation.

Together they plan to explore potential opportunities, including the development of ports and logistics assets in Israel.

Announcing the agreement, Sultan Ahmed Bin Sulayem, Chairman and CEO of DP World said, "The new relationship between UAE and Israel brings opportunities to increase trade and prosperity in the region.

Working in partnership with a reputable financial institution such as Bank Leumi will enable us to better deliver our end-to-end solutions strategy.”

The company headquartered in Dubai also entered into an agreement with the Israeli Chamber of Commerce and along with Dubai Customs signed a series of memorandums of understanding (MoUs) with one of the co-owners of the Israel Shipyards and Port of Eilat.

The companies said they would work together in assessing opportunities to develop infrastructure for trade between Israel and the UAE, as well as within Israel and the region as well as participating in the tender for the privatization of the Port of Haifa.

Other international shipping lines serving the region are also expected to introduce service between the UAE and Israel in the near future.