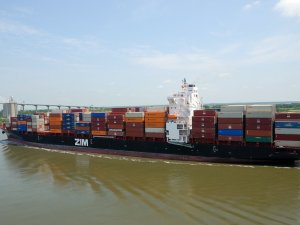 Israeli shipping company ZIM has reported a net profit of USD 5 million for the third quarter of 2019, after returning to black in the second quarter of the year.

ZIM achieved the net profit on the back of USD 842 million of revenues in the three-month period that ended September 30.

The company’s 3Q profit was almost identical to that from the second quarter of the year when it reported a net profit of USD 5.1 million against USD 834.3 million in revenues.

“In spite of the challenging market conditions, ZIM continued to record improved results in Q3, as it did throughout 2019,” Eli Glickman, ZIM President & CEO, said.

“Our ongoing efforts in the spheres of customer experience and digitalization also bear fruits, as we continue to focus on our customers’ needs and push for commercial excellence in all fields.”

This news is a total 492 time has been read
Tags: earnings, ZIM Shipping