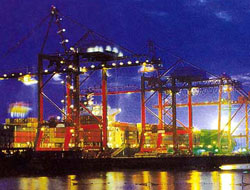 The current global economic crisis has had no effect on Sharjah Free Zone?s on-going expansion projects.

The current global economic crisis has had no effect on Sharjah Free Zone"s on-going expansion projects.

The current global economic crisis has had no effect on Sharjah Free Zone"s on-going expansion projects. Sharjah"s status as an industrial hub has propelled Hamriyah Free Zone (HFZ) to greater heights, due to the availability of the necessary infrastructure such as a deepwater port, a cost-effective power plant and natural gas - the only free zone to offer this, says HFZ Director-General Engineer Rashid Obeid Al-Leem.

Speaking at a session of the Sharjah Consultative Council on Thursday, Al-Leem said that Hamriyah"s port has attracted a growing number of global cement and steel industries, including oil and gas companies that require terminals close to the shoreline.

?The internal port that is being developed is due to start operations in March 2009, three months earlier to the scheduled deadline,? he added.

He disclosed that investors have access to a 14 meters deep-water port and 6 metre deep inner harbour.

?The massive power station project is supposed to be completed very soon while the fourth phase of the marine city is set to start operation in April 2009,? said Al-Leem.

Highlighting HFZ"s ongoing expansions, Al-Leem said the Zone was only 10 years old, however it had attracted 3500 companies from 120 countries worldwide that exports products and services to 70 countries. The developments achieved have far exceeded the plans charted, he said.

The port which is open 24 hours a day, is strategically located, making it as the first point of contact for vessels coming in through the Straight of Hormuz.

?We also provide investors with land for lease for development purposes, pre-built warehouses, factories and office units are also available for lease. Other amenities include executive office suites in the International Business Centre and on-site accommodation for investors personnel,? he explained.

Overlooking the sea front, and based on a 500,000 sq metres land, Hamriyah Maritime City has been conceptualised as an integrated Maritime Industrial city with comprehensive facilities for shipyard operators and maritime related industry with the idea to provide a One Stop Shop engineering solution to Shipping Industry.

Al-Leem said that 65 per cent of the staff at the Zone are Emiratis.

?Though they are not bound to recruit nationals, it is a must for the international companies operating under the Zone to provide training to locals.

Meanwhile, privileges are offered to encourage Emiratisation at the registered companies, and scholarships are also provided for local staffers in Singapore and Malaysia. Consultation and even 24-hours temporary permits are issued for the nationals interested in providing services, wherever and whenever they want,? he said.

This news is a total 1511 time has been read